Friday Crafternoon: A little inspiration for your weekend!

Today I finished up a shadowbox project that has been bouncing around in my head for a while. I have an ever growing collection of old photographs, which started somewhat by accident. Now I am always on the hunt for them! It’s fun to peek into their lives and imagine their stories. This particular photo came with no name, no date, just a simple “40 years” written in pencil on the back. 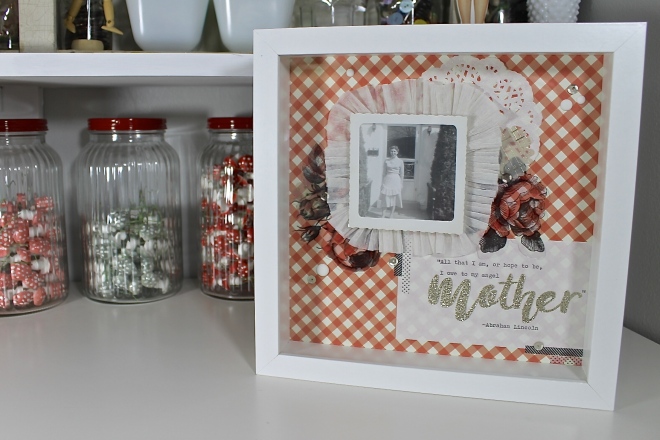 In this photo centric age it is hard to remember a time when taking a photo meant something different. Now we can take take unlimited photos, see them, edit them, and print them right away, but I remember dropping off film, waiting, and being filled with excitement picking up my little packet of photos and hoping they turned out well. I definitely prefer the way things are now, but there is something to be said for these un-edited snapshots. 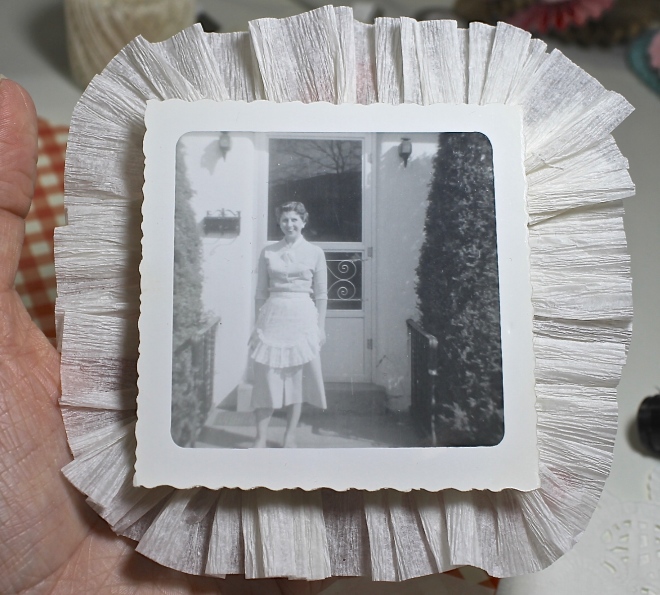 I’ve been incorporating crepe paper into a few projects lately. I like to buy streamers since the paper is already cut to a manageable size for my tiny projects. To get the ruffles I sewed down the center of the strip, gathering as I went with the tension setting very loose. After I began to lay out the ruffles I realized that they echo the shape of her apron hem. It must have been a subconscious influence! 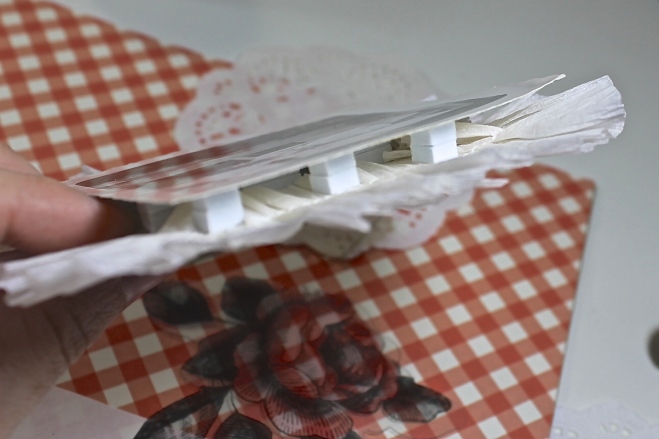 I stacked two foam squares to get extra dimension and leave room for the ruffles. 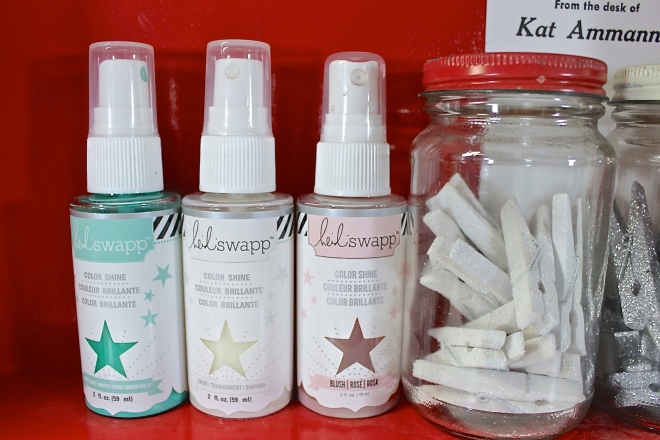 I wanted to add some shimmer to the doily peeking out from the top, so I turned to my Heidi Swapp Color Shine. I covered the entire doily and let it dry over night. It is so subtle, you can’t even tell in the photos. 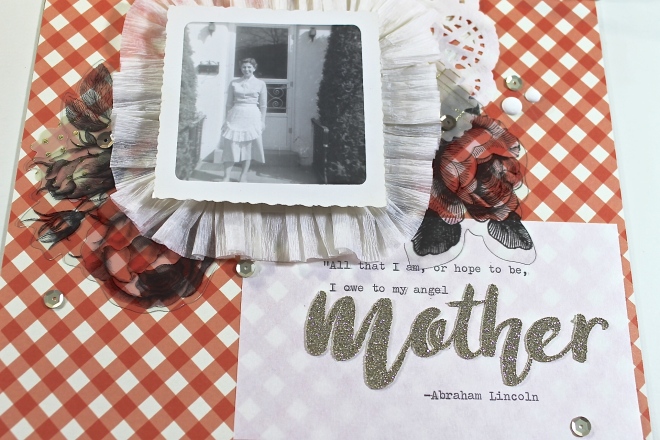 Of course I added in some washi and sequins, because I just can’t get enough! And yes, those are vintage barber scissors. I found them at the thrift store and they cut better than most crafting scissors I have tried. All metal, made in Germany, and still sharp. 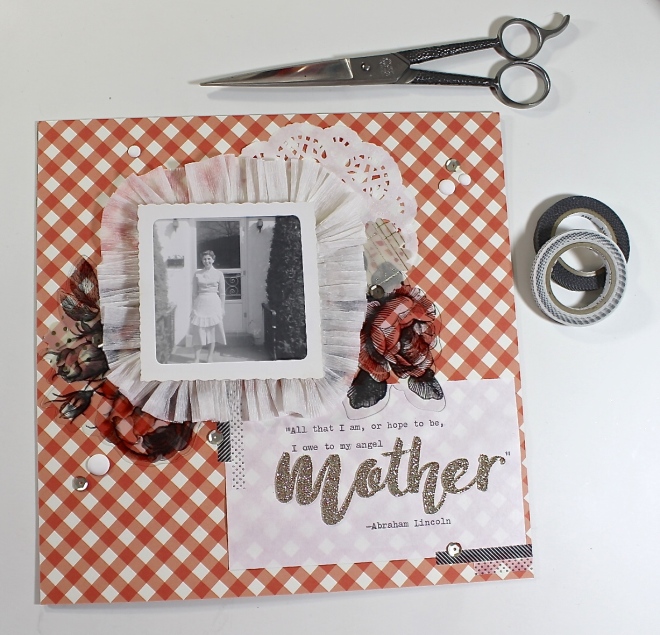 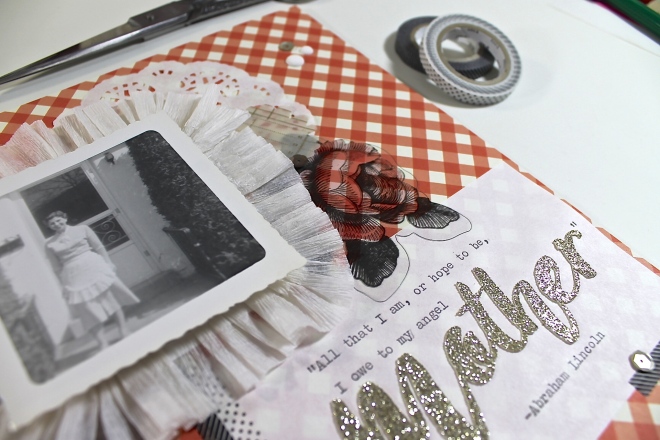 A lot of my work is inspired by mothers. In college, my senior thesis exhibition was entirely focused on the subject. You may not have known your mother, or your grandmother, or her mother, but there is a story, there is a history. We all have a mother, and even though we may generalize or stereotype the role of “Mom” each of our experiences is unique. For better or for worse, they are who they are and it shapes who we are. 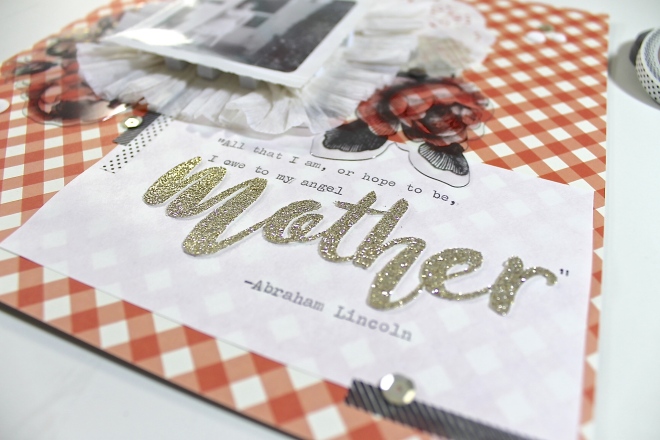 Now, I don’t mean to downplay the importance of fathers. I was equally nurtured and supported by both of my parents, and I certainly take after both of them. My father always spoke fondly about his Grandmother and told me what a talented artist she was. I was given my middle name, Elizabeth, after her but perhaps that isn’t the only part of her that was passed on to me. My creativity and passion for crafting is a huge part of who I am, and that I attribute to my mother. As far back as I can remember we were crafters. If we saw something we liked, we would try figure out how to make it. If I showed interest in something she was doing, she would teach me to do it too. Not even out of necessity, but because we shared a passion for making things. I don’t ever remember being told I was too young to learn anything. I watched her constantly trying new things and teaching herself as she went and I adopted that practice as I got older. 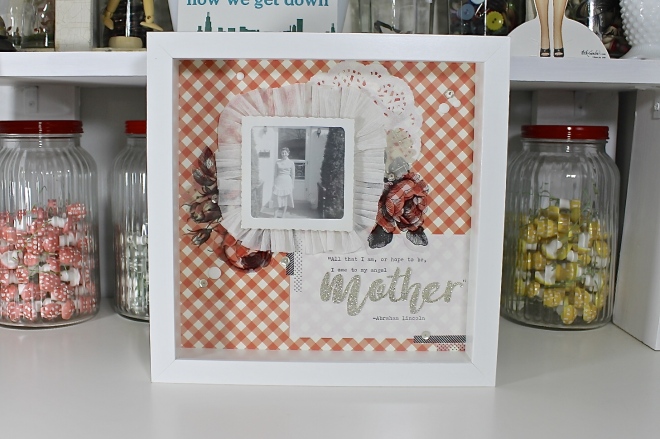 I am not a mother, but I still carry the legacy of all the women who came before me, not only in this family but in all of my life. Who was this woman? I may never know, but imagining her story becomes a mirror in which I reflect on my own story. What women have influenced you the most? I would love to hear your stories!